After reading many propositions on social media, it turns out that many people would like to read about thoughts or feelings regarding my games. Everybody can see the kifu on the internet, but it is interesting to know, what happens behind the curtains.

I would like to talk about my game in technical matters as well, so people interested in learning shogi can understand little more about techniques used in the game.

Usually kifu are not public, but this one can be seen on the Joryu Oza tournament page. Therefore I will be only commenting the moves without putting diagrams in the post.

Joryu Oza is a tournament with a longer thinking time, it was 3 hours per player plus 60 seconds byo yomi. I am overthinking type, so I like longer timed games better. I hope that thinking speed / intuition will come with experience.

You may think “wow, three hours is a lot of time!”, but actually time flies pretty quick when you try to count all the variations. Therefore it is better to not spend too much time about each move, and rather spread time between game phases, leaving some for the endgame. This was my strategy for this game as well.

What you don`t know is that I just came back from Europe and had jet-lag. I spend previous day resting a lot, eating food at proper Japanese time (because I think food habits influence your biological clock the most).

My opponent is regarded as a strong ladies professional, so I was concerned. But there is something that I have learned in the past months: that only I can believe in myself. If I do not there is no point in even trying. My shogi is hugely influenced by my mental state, so I had to concentrate and find strong reason to play. That will be my secret here.

There were only two games at the Renmei that day, we had the whole room for us. Felt very nice. I could concentrate.

The opening was bad – it did not feel bad – but it was little good for gote. The battle became harsh near the lunch time.

Move 51. was a good one, but 53. it was probably better to run away with the rook. Move 58. was painful, my bishop drop defense was clumsy. A bad style, but it was the only way that seemed proper for me.

Then P*89 I found cool, distracting the dragon and getting a chance to make some counter. I am pretty sure my way to attack was not good (L*47), because my position was distorted, but felt confident.

Move 87. N65 looked like an overplay. Taking two pieces for a bishop and getting promoted dragon gave sente little lead. The problem was, how to get to the opponent’s king? There was no obvious move. Everything looked bad or heavy.

Exchange on move 103. felt assuring, bishop position was decided, pieces in opponent’s hand was limited to pawns and silver. Move 110. was a good one, activating the dragon.

There was a frustration in time running out, when you have a better position, but no way to get the king. Move 117. was a mistake. Looks good – but actually does not work. Gave gote the initiative and chances to turn the game around.

Move 120. was like a needle to heart. If I show weak spirit here, the table would have turned. I used a lot of time here struggling with myself. I have dropped the pawn.

Move 129. N takes. That was a good feeling. I was seeing the line with S*33 already. I was expecting Dx66 and reading what I could do with it. Move 130. the dragon took the pawn. I fell into byoyomi, but that did not bother me. I saw the line already, checking if I did not make mistakes. All the lines lead either to tsume or to dragon – check bishop drop. I was confident.

Then I started to wonder. At move 138. what if she drops B*73? Very strange move, my brain likes to surprise me with those at panic situations, wasting my time in byoyomi. But I read Nx=, which was tsumero and it was fine.

Then there was simply looking exchange of move 140. B*64, L*55. What is important, lance at 55 was threatening the gote’s king, not losing the tempo in endgame.

And there is some point I would like to show. Why not Bx move 147.? R*31 was actually asking for aigoma (piece drop to block the check), so that opponent would not have tsume. Let’s call it your homework. Find tsume sequence after move 147. with the mistake Bx.

The game has finished at 16:53, after 149 moves. For the first time I have advanced to Joryu Oza main tournament. I was excited for days afterwards. It is not good for a shogi player to dwell on lost games, but there is also a trap in being overexcited about won games as well. 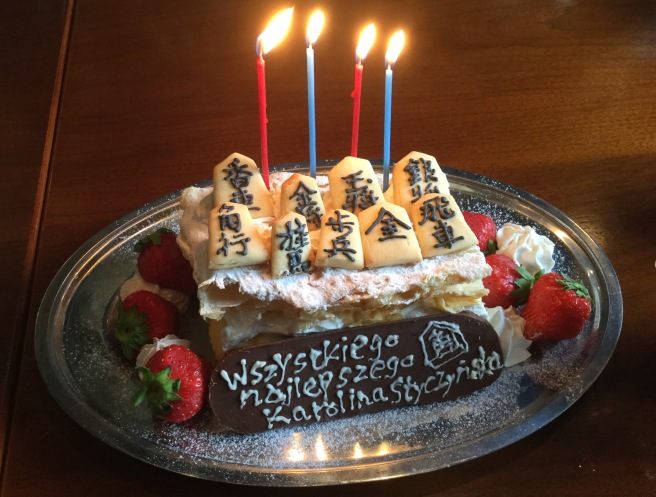 I have been pretty busy last month. As I have promised, I put my whole energy into it and when I was done, I realized that June has almost ended (laughs)

In May I went to Osaka as a member of Mori Ichimon – shogi family of Mori sensei (who is shisho of my shisho, Katagami sensei). I had various jobs like speeches, shido and kiroku. I have won elimination round for Ricoh cup 5/20 against Takebe Joryu 3dan.

June started with job everyday of first week, then flying to France on vacations. Two days after arriving back, I fought against Wada Joryu 1dan. After a big fight I have won and for the first time I have been qualified for the main tournament of Ricoh cup! I was very happy.

I did not have enough time to share all the news, since this week is Yamada cup, for which I have to prepare!

I had my 26th birthday this month. It is really great to be Joryu 1kyu on such a day. I will keep doing my best.